One of the most impressive things in these fast-paced, digital, and modern times is a letter written in calligraphy. Not only is calligraphy beautiful for the reader, it is also a great stress-reliever for the writer. While calligraphy is a rare skill that can take quite a bit of time and practice to obtain, someone who is good at calligraphy can not only impress their friends, they may also be able to build their own business off of doing calligraphy for other people!

Modern calligraphy has more freedom in general than traditional calligraphy does, but it still has to follow some basic rules to make the overall script look harmonious. The most basic strokes to remember with modern calligraphy is where the thick and thin lines should be. In general, thin lines should be the strokes in which the pen moves up towards the top of the page and thick lines should be where the pen or brush moves down towards the bottom. The thick strokes are made by adding some pressure as the pen moves down while the thin strokes are made by only gently touching the top of the pen to the paper.

Traditional calligraphy is considered to be made up of several scripts such as Copperplate, Spencerian, Italic, or Blackletter. Each script has its own structural rules and ways to write each letter.

However, you cannot start learning calligraphy until you have the proper tools! In this article we will show you our top three picks of the best calligraphy sets for beginners to help you get started on the calligraphy journey.

Pointed Tip Calligraphy
This is probably what most people think of when they hear the word “calligraphy”—a calligraphy pen with a tip that comes to a point at the end that looks sharp enough to stab someone with. However, one of the useful things about a pointed tip calligraphy pen is that when pressure is applied at the tip the two different tines, or sides as you may know them, split. This split allows the pen to make the beautiful thick down strokes seen so often in calligraphy. This is also a very common pen found in calligraphy sets for beginners and is most often found in the sets that only provide one type of brush.

What to look for in a calligraphy set for beginners

Once you have decided what tool you want to start out with, it is time to buy yourself a kit. While you can always go to your nearest craft store and peruse whatever they have in stock, you may quickly find yourself overwhelmed with choices, as there are not only many calligraphy sets for beginners out there— there are also hundreds of different writing instruments to use for calligraphy ranging across all styles, looks, and brands. In order to get started on the calligraphy journey you will several things for your calligraphy set for beginners, all of which are listed below:

When bought separately each of the above things can add up quite quickly and you may encounter problems that you would not have had by buying a complete set. Some of these problems include the nib not fitting correctly into the barrel, the quality of the ink such as the ink drying too fast, too slowly, or not having a correct consistency, or the paper may smudge or smear as you write on it.

This is a great kit for those starting out in calligraphy and who are looking for a good calligraphy set for a beginner. It checks all of the boxes that any good calligraphy set for beginners would require. It is inspired by the wonderful classes offered by Wildflower Art Studios and looks absolutely gorgeous from the start! Each of these brush lettering kits includes a sketchbook with tracing paper, four alphabet practice books, and 6 brush pens. Even better: there are two wide-tip brush pens that come with black ink, two fine-tipped brush pens that come with silver ink, and one fine-tipped brush pen that comes with gold ink. Each set also comes with a guidebook containing step-by-step instructions and illustrations and a variety of blank tags, cards, and envelopes to either practice on or to use for personal projects.

This kit is very much geared towards people looking for calligraphy sets for beginners and even provides a range of brands within its six brushes for beginners to get a feel for what brand they might like best. The DIY Brush Lettering Set by Wildflower Art Studio is a great entry point into the world of brush calligraphy. A pencil is also included to help true beginners trace out their letters before practicing with their actual brushes.

The reviews for this product are very good and report that it contains high quality materials and everything that a good calligraphy set for beginners would need. However, at $44.50 this kit is priced fairly high for what it contains. Some reviewers also reported that they felt that while the kit was nice in general, it was not so nice as to justify the price and they were disappointed with the overall look of the kit. In general though, this kit is a good calligraphy set for beginners and the price may justify the convenience of being able to get everything that you would need all at once place.

The guides in this kit provide a wide range of styles for you to choose your favorite from; roman, italic, brush, and contemporary lettering guides are all provided along with an italic envelope lettering guide. Another good thing about this kit is that it comes with a brush, broad-edge tip, and fine-point tip. Having such a range of writing instruments in this calligraphy set for beginners allows for you to test out each instrument and writing style if you are still unsure about which one you think that you would prefer.

This calligraphy set for beginners also provides a wide range of nibs and plenty of ink to practice with. It comes with sixteen ink cartridges, four pen barrels, and 4 pen nibs. While it provides plenty of instruments, one downside to this kit is that most of the nibs appear to be fine-tipped with perhaps one nib that has a more broad-edge, and the kit does not come with a brush, pencil, instruction book, or practice sheets of paper. While this calligraphy set for beginners may be just what you need and comes at a fairly cheap price, the lack of different types of pens and reported low quality of the set may not make this is best or most cost effective purchase.

One thing to know with this kit is that while the manufacturers claim that an instruction booklet is included, the reviews on Amazon report that no instructions were included and that the pen nibs, barrels, and ink cartridges need to be assembled manually. do not come with instructions on how to set up the pens with an ink cartridge. In light of this, we have attached a step-by-step list below to explain how to assemble each pen.

1. Unscrew the nib from the pen barrel and set the barrel to the side.
2. Take the nib section and place the ink cartridge into it with the small side of the cartridge towards the nib.
3. Turn the two parts upside down and hold the cartridge against a firm surface like a counter top or table.
4. Push the section down firmly, pressing until you hear a snap.
5. Screw the pen barrel back into place and cap the nib when not in use.

Tips and tricks to remember for your new set

Once you get your calligraphy set for beginners keep in mind that most nibs that come straight from the manufacturers are usually coated with a type of oil to help keep the nib sharp and to prevent any rust or decay. Before using your pen from your calligraphy set for beginners it would be best to clean the nib of any chemical coatings. There are various ways to clean a nib ranging from special cleaning solvents to simply sticking the nib gently in a thin slice of potato. If the nibs from your calligraphy sets for beginners are not cleaned it could also cause problems with ink flow and the ink could have problems with blobbing on the paper, having stop and start ink flow, or the ink may not even flow at all.

Another tip to know once you get started practicing calligraphy with your new calligraphy set for beginners is that it takes lots of time and practice, and that the muscles involved may require both strengthening and training before they are able to begin to make letters that look like they came out of one of the guidebooks. The most important thing when it comes to using your calligraphy set for beginners is to remember that you are a beginner at a skill that requires more fine motor control than most other things in a normal day. While you may rather spend your time writing in fancy scripts, the hours spent getting to know your calligraphy set for beginners by practicing your upstrokes, down strokes, and circles is time very well invested. Just like riding a bike or especially like learning how to paint, calligraphy is an art form that takes much more practice than most people realize. However, the results are absolutely beautiful and will make you the envy of everyone you know. 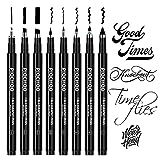 CALLIGRAPHY for Beginners + Course on the Theory of "Traditional & Modern Calligraphy": Step-by-Step...
$6.99
Buy on Amazon
Bestseller No. 3

Learn Calligraphy: The Complete Book of Lettering and Design
$9.99
Buy on Amazon
SaleBestseller No. 4 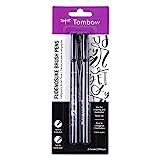 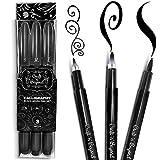